Collectors know it: the month of June is one of the two pivotal times of the year when the most beautiful pieces are sold at prestigious auctions. A month that started very well with the Huberty & Breyne sale, during which works by Tillieux, Morris and Hermann broke, as we have told you, impressive sales records.

The long-awaited second session of course remains that of Daniel Maghen. And once again, amateurs will be dazzled by the 169 pieces that the gallery owner has been able to collect. The latter can count on a group of authors who are loyal to him, and who have already been able to benefit from the honors of previous catalogs specially dedicated to him. Thus do we find half a dozen pieces ofAndre Juillardfrom the universe of Seven Lives of the Hawkfrom blue notebook and of Blake and Mortimer. There are also several plates and illustrations of Ted Benedict also honoring the famous tandem of Jacobs. 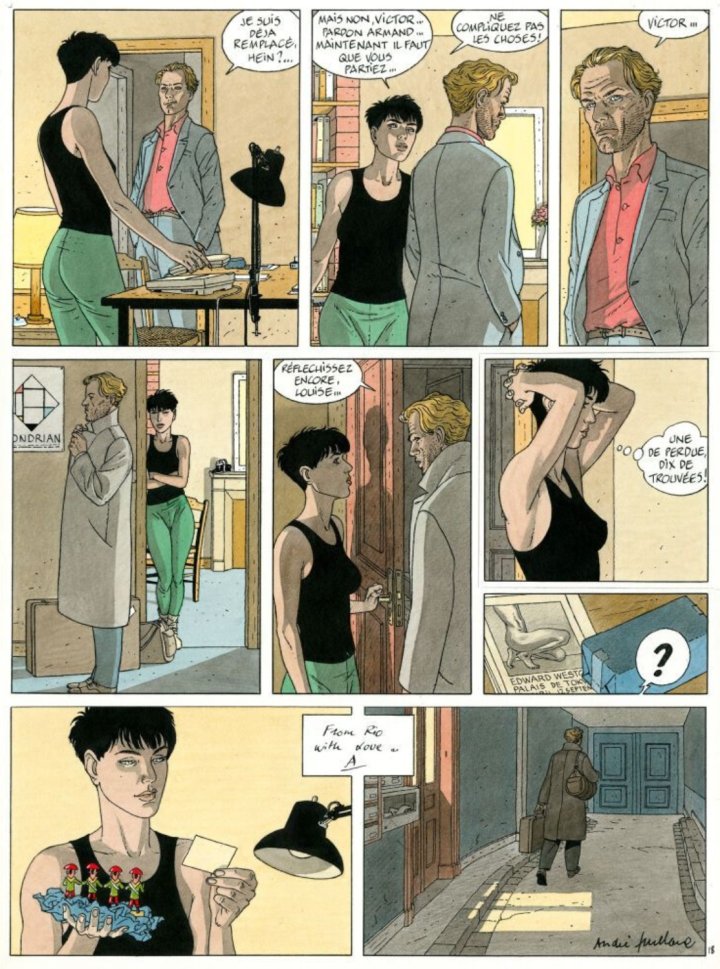 Without surprise (but always with happiness), Jean-Pierre Gibrat answered present with boards taken from the Flight of the Ravenof Matteo and Reprieveas well as some very beautiful covers and illustrations which are once again likely to drive the auctions crazy.

Now also a regular at the house since the catalog dedicated to him two years ago, Matthew Bonhomme took over the famous cover of Lucky Luke vs. Joss Jamonand offers a page from the first volume of empress charlotte.

Rosinsky is in the game again, with a board ofBeyond the Shadows (Thorgal), as well as one of the last pages of the Great Chninkel Power, one of those where the young hero, understanding the mission entrusted to him, accepts the disastrous fate that results from it. It’s arguably not the most graphic page of Rosinski’s debut graphic novel, but certainly one of the most emotionally strong, for what remains one of the best-selling one-shots of the strip. European cartoon. 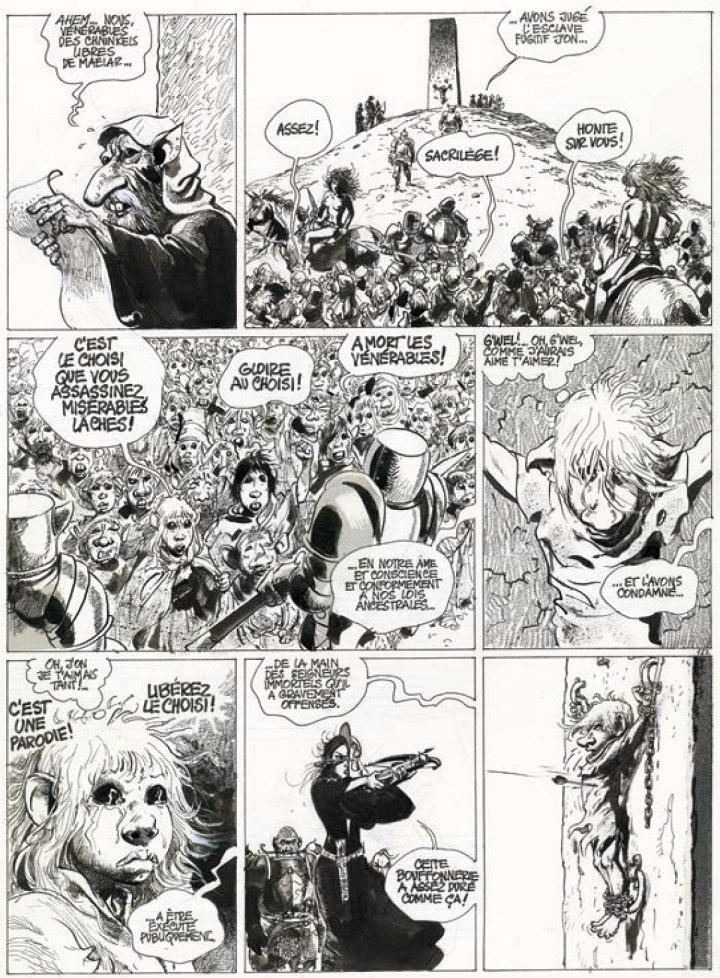 Like a symphony, Daniel Maghen composed his sale by alternating his faithful authors with a few pieces by legendary authors of the ninth art, without whom this sale would not have the same prestige. Let us quote pell-mell Bilal and two very beautiful direct color plates of Hunting game, Giraud and two boards of blueberry produced at two very different times in the author’s career, Mezieres with two boards Valerian, The Country on the Star and The Shadow Ambassadorwithout forgetting Tardi, Uderzo, Greg and others. 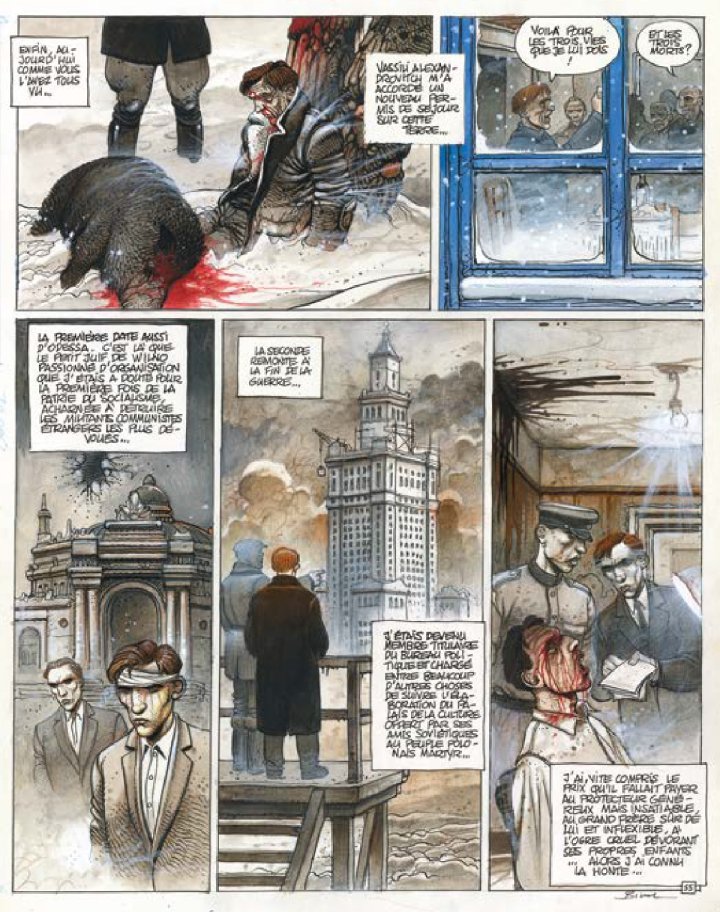 Among the headliners of Tintin Diarywe find two pieces of Cuvelier including a magnificent work in progress of Corentin, as if the author was going to resume his work in the next moment. We also enjoy a superb sample of the work of Jacques Martinincluding the 4th cover of Alix’s Odysseya board of lost legionsan album considered one of the peaks of the master of historical reconstruction, as well as the original of one of Scenes from ancient lifea monument of detail! 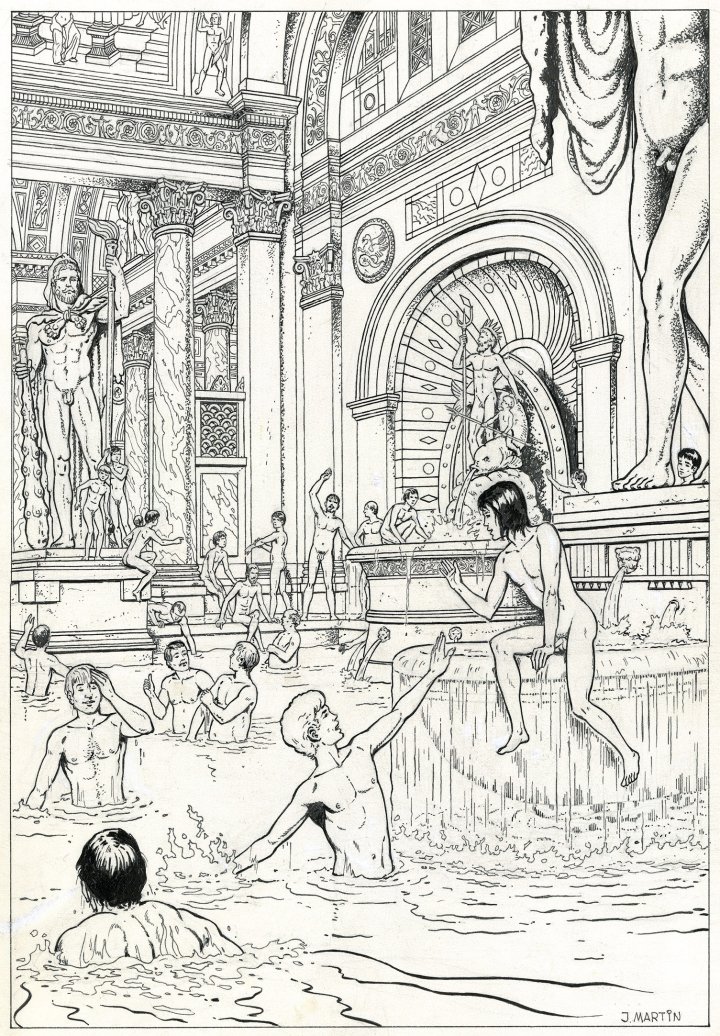 NoHergenor of Jacobs, but on the other hand a beautiful double drawing of franquinwith Gaston in his Fiat, made for the manufacture of a sweatshirt. Gotlib is not forgotten, with the double page of a parody of Five Last Minutes presented as unreleased in album! Let’s not forget either Tillieuxwhich we will see if the rating will be maintained after the two records reached last week.

Also impossible to omit William Vanceincluding the sale of one of the covers of ramiro had reached records of the previous edition. Consequently, Maghen offers this time one of the most magnificent covers of Bruce J. Hawkerand even does him the honor of the cover of his general catalogue, which is to say the importance that the Belgian master in the eyes of the Parisian gallery owner, without forgetting a board of XIII and a magnificent graphite illustration of Major Jones, also present in this sale. 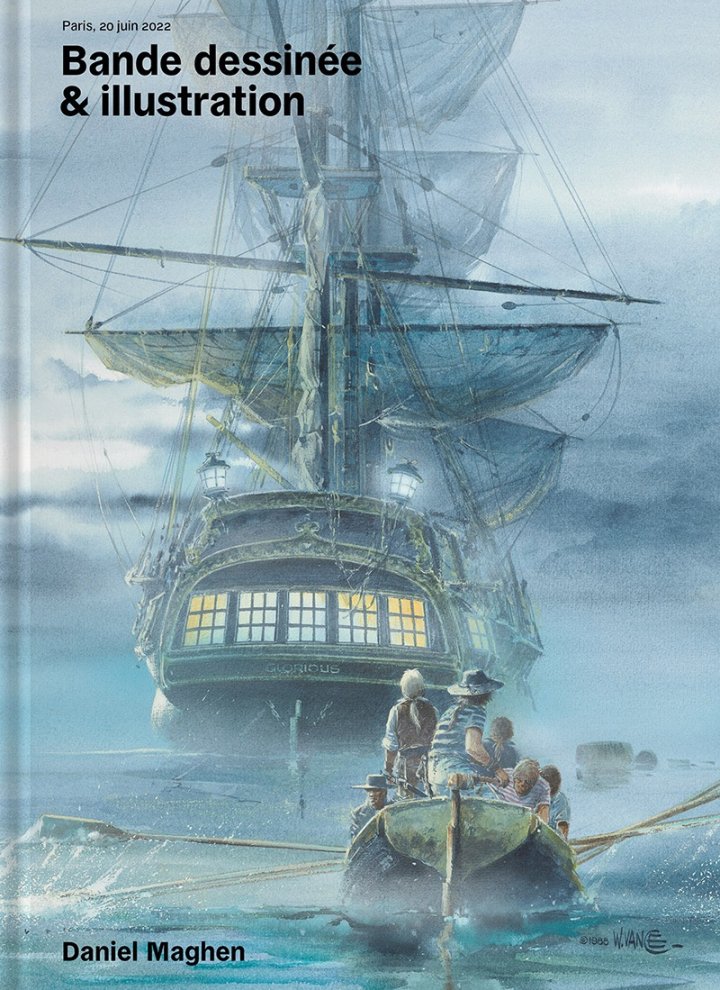 Maghen also presents a few pieces by authors who are more often found in the Huberty & Breyne catalogue, such as this very beautiful illustration of a saloon for bouncer signed by Francois Boucqas well as half a dozen works by Milo Manara. For the latter, we find a board of the Perfume of the Invisibleand above all two more recent illustrations by the Italian master, used for Italian reissues of the Click and of Giuseppe Bergmanone in magnificent colors, and the second in a perfect balance of black and white, like the two sides of a medal that demonstrates all the talent of this immense author.

Also honored by the cover of the previous session, the gouaches of Pierre Joubert compose paintings outside of time, where scouting, sharing and group life are all values ​​to which the artist bears witness in his compositions.

Finally, let us salute the half-dozen pieces signed by the late Michel Plessix. Whether pencil sketches, inked plates, or magnificent color illustrations, his talent and sensitivity undoubtedly shine through in these works of bucolic poetry. 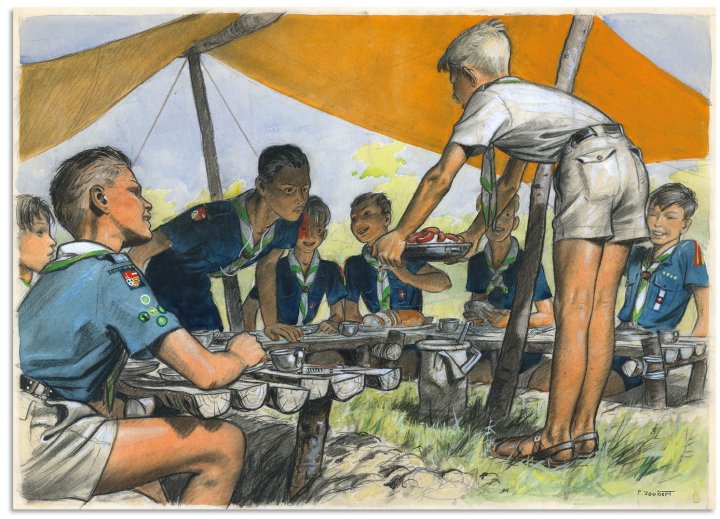 Some authors are rarer at auction, even if they already have a career as impressive as that of Didier Tarquin. What hope that collectors will show interest in this board of Lanfeust of Troyespecially since it is one of the first volumes of what remains as one of the greatest sagas of humorous Heroic-Fantasy of the genre. 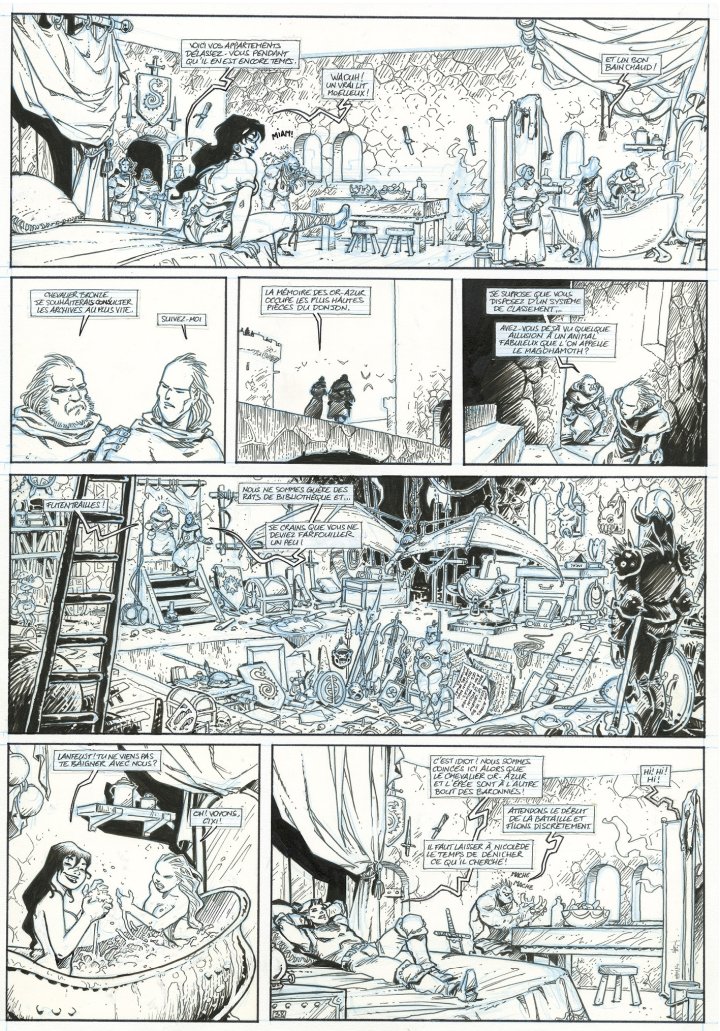 Other authors and illustrators also have one piece or the other, within this prestigious session. Impossible to list them all, but in the field of space-opera, let us mention all the same Serge Pelle with a cover ofOrbitalas well as this wonderful illustration by manchu. 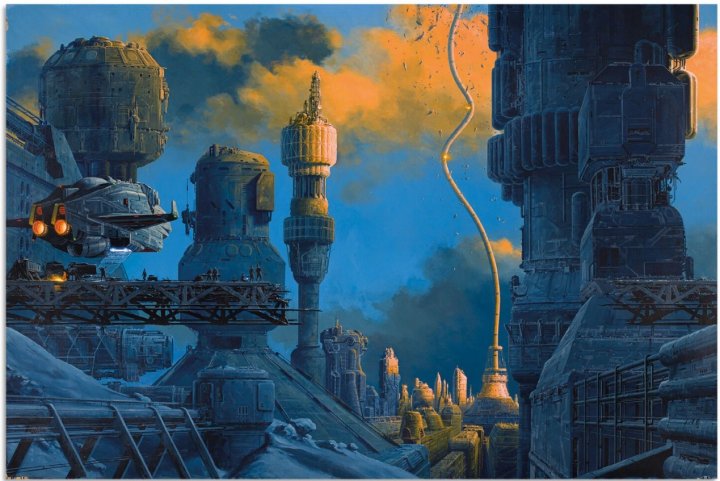 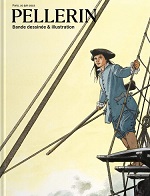 Two guests of honor are the subject of catalogs which are exclusively reserved for them. These works are similar to small biographies, where the care of the reproduction of the pieces competes with interesting files in which these authors have the opportunity to testify to their passion for drawing.

Re Patrice Pellerin, it is as much about drawing as it is about historical rigor. An involvement fully understood by the author’s fans, who patiently wait several years between each of his albums, the time that Pellerin can gather the necessary documentation and conscientiously bring the past to life for them.

The ten or so pieces collected broadly outline the author’s career. Two boards of Redbeardscripted by Jean Michel Charlierbefore his death forced Pellerin to transform Éric, the son of Barbe-Rouge, into Sparrowhawkendowing him with a large scar to differentiate the two characters. 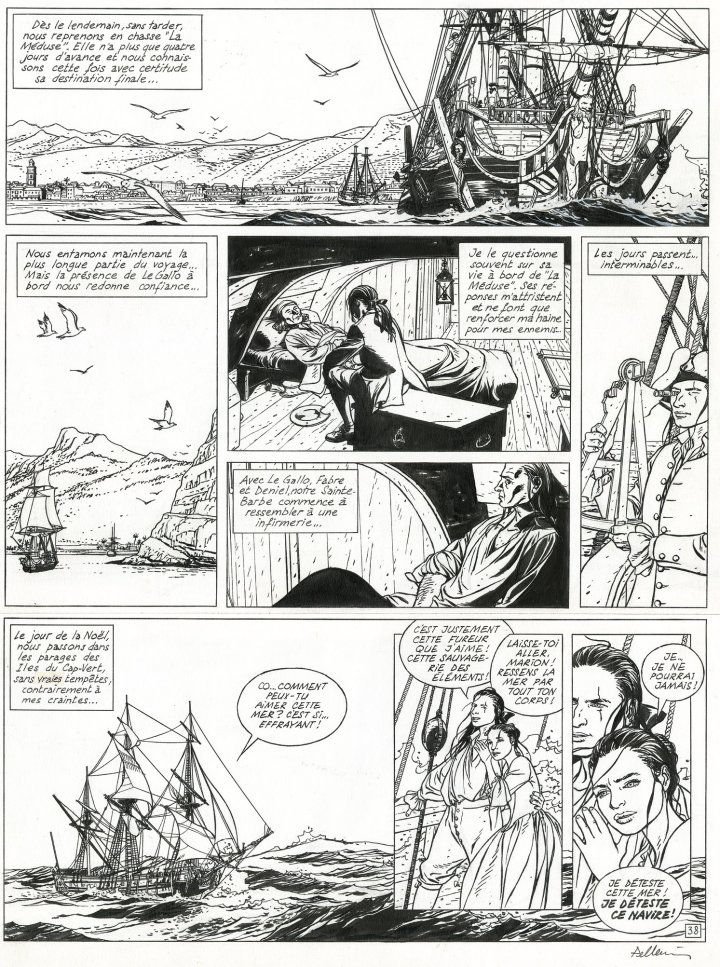 With Sparrowhawk, Pellerin takes flight, to the delight of its readers. The selection retraces these important stages, with boards that bring together the sea, the boats, and the main characters. Let us thus quote plate 38 of volume 4 entitled Captives on boardwhere we find not only La Méduse, the hero’s famous boat, but also the beautiful Marion.

Agnès de Kermellec is also honored with a color illustration. Watercolors that will undoubtedly appeal to amateurs, which will raise prices much higher than the estimated values ​​displayed! 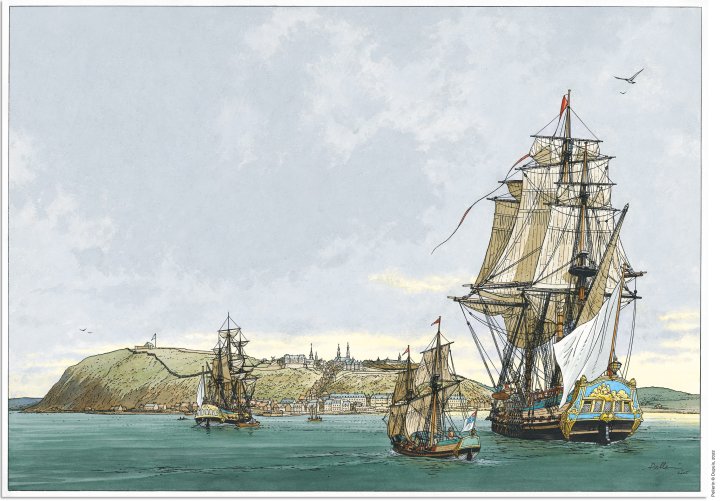 Batem: alongside the Marsupilami 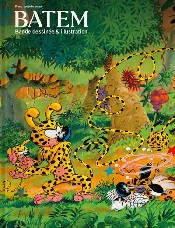 Second prestigious guest: the illustrious[[Batem who presides over the destiny of the Marsupilami, since Franquin entrusted him with the task thirty-five years ago. A life of investment in which Luc Batem was able to demonstrate how much he deserved the trust of the master, by breathing a leaping life into each of his boards.

An abundance of energy and details that are obviously found in the selection made by Daniel Maghen. Boards that start from Marsupilami’s very first album, when Franquin could still advise the young author who was Luc Batem at the time, until releases closer to us and which have marked readers just as much. 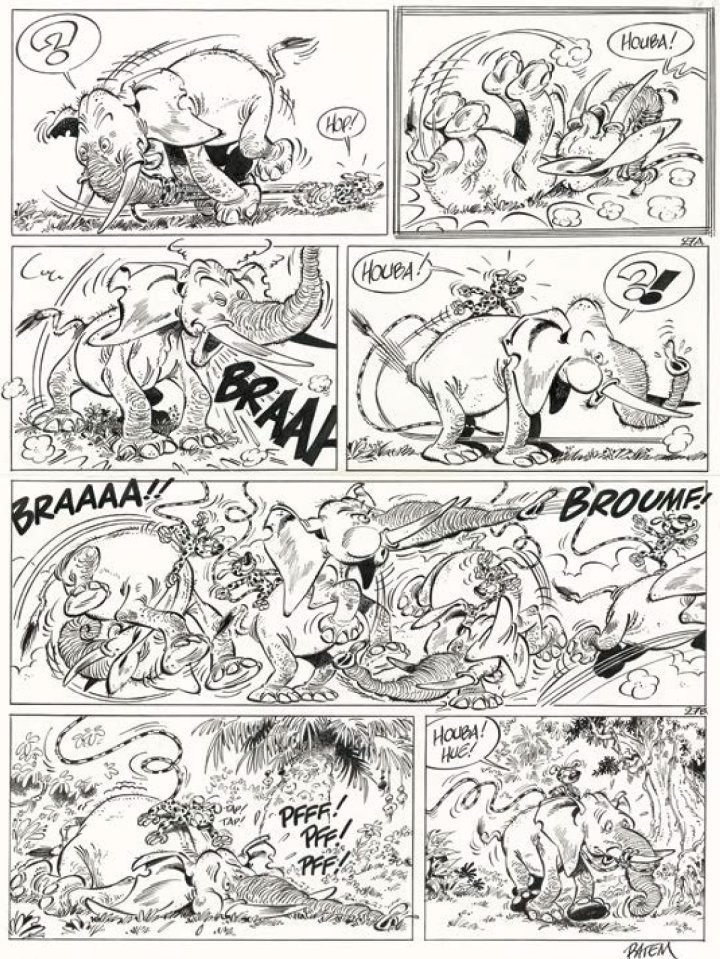 The artist also knows how to play with color, by proposing magnificent shimmering compositions in gouache, or others where the touch of color paradoxically makes it possible to highlight all the details made in ink. 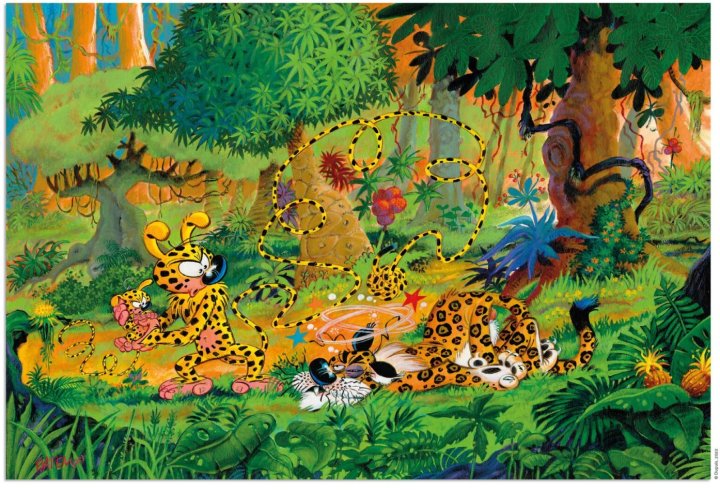 Vacation after vacation, Maghen therefore continues to imprint its mark with a sure taste, an appetite to defend the artists in which it believes, while continuing to offer a wide, contemporary offer, without neglecting the heritage. The results should once again confirm this profitable strategy.

This article remains the property of its author and may not be reproduced without his permission.