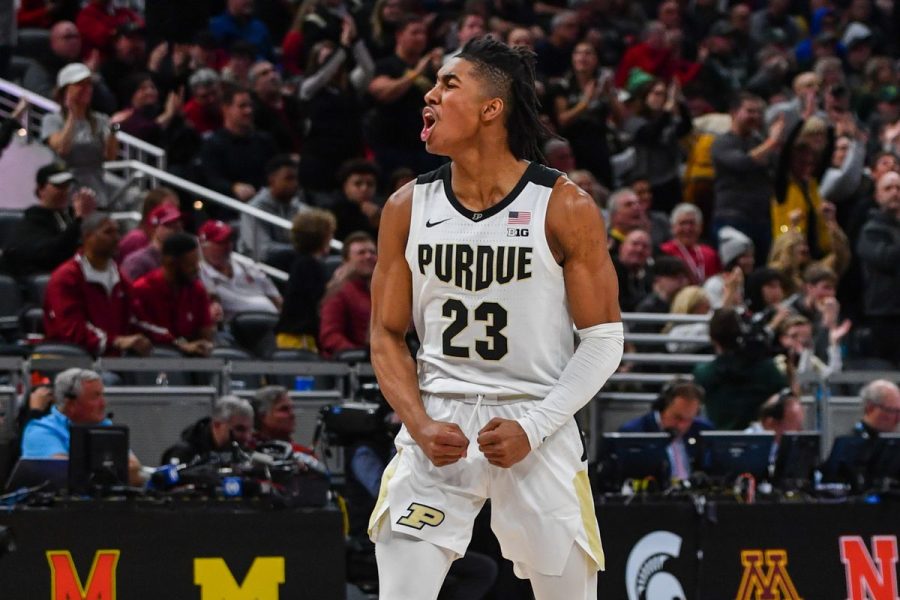 He is one of the rare players expected among the very first choices of this Draft 2022 not to be a “one-and-done” in the NCAA. Indeed, Jaden Ivey played two seasons at Purdue before taking the plunge.

During his first season (2020/21), the back had only started 12 times (in 23 games), and completed this exercise with averages of 11.1 points (39.9% on shots), 3.3 rebounds and 1.9 pass. An encouraging “freshman” season, but which left a lot of room for improvement, before considering the NBA the following year.

Before playing his second university season, Jaden Ivey participated in the U19 World Cup in the summer of 2021. Gold medalist with the United States after their narrow victory against France in the final, during which he scored 16 points , the native of South Bend, Indiana, splashed the competition with all his talent. With averages of 12.3 points, 3 rebounds, 2.1 assists and 1.6 steals per game, he was elected in the tournament’s five majors, alongside his compatriot Chet Holmgren, Canadian Zach Edey (his teammate at Purdue), Serbian Nikola Jovic and of course the Frenchman Victor Wembanyama.

On the strength of this international experience, the rear explosive then arrived on the West Lafayette campus, at the start of the 2021 school year, ready to take a step forward, both individually and collectively with the Boilermakers.

Having become the offensive leader of the squad, he experienced meteoric progression in all statistical categories. In its wake, the Boilermakers finished the regular season in third place in the Big Ten conference, behind Illinois and Wisconsin, and they had an honorable run during the “March Madness”, losing only to the “Elite 8”, against the surprise of the year, Saint Peter’s.

This is what is most obvious among his qualities, and this is what should be his strength in attack from his debut in the NBA. The fullback is very fast, and that devastating first step made him an almost unstoppable fullback in the NCAA when attacking the circle. A bit like a Ja Morant or a Donovan Mitchell when they attack in the axis, he is able to change rhythm and speed in a fraction of a second to leave his opponent on the spot.

Faced with certain intractable outside defenders in the NBA, such as Marcus Smart or Jrue Holiday, access to the circle will of course not be as simple as at university. But with this first sharp step, Jaden Ivey is already certain to be able to put pressure on opposing defenses, and to keep his direct opponents alert.

With this dazzling first step, Jaden Ivey demonstrated a disconcerting ease in accessing the circle, but shined even more with his finishes. It is not the two Rutgers players, Ron Harper Jr. and Paul Mulcahy, who will say otherwise.

Quick and explosive with this first step, powerful upper body, he knows how to take contact and can finish at altitude in the circle. If so, it often happens too quickly for the defender to stop or counter it, and gets the foul. This is a very good point for a young fullback who often had the ball in his hands at the start of his career. On evenings of skill failure, he can always count on his aggressiveness towards the circle to remain useful to his team in attack.

– A promising outside shot.

Of course, that’s not to say that Jaden Ivey will suddenly become Ray Allen when he arrives in the Big League. But for a player whose qualities are above all athletic, he demonstrates a reassuring touch in shooting. In the NBA, surrounded by better creators than at Purdue, he should enjoy comfortable “catch-and-shoot” situations. In “pull-up”, there is also potential and room for improvement: he converted 33.3% of his 3-point shots taken from the dribble last season.

– What position in the NBA?

More a question than a real weak point, Jaden Ivey’s position in the NBA will depend on his team, and the offensive context in which he will evolve.

At Purdue, he was a second back, while also being the primary ball carrier on pick-and-roll. If we imagine him in Sacramento in 4th position, Detroit in 5th or Indiana in 6th, he will be associated with pure point guards, better creators than him, and will then be a second back rather focused on finishing in the circle and outside shooting .

In another context, on a team that doesn’t have a creative point guard to partner with, Jaden Ivey can establish himself as a primary ball carrier, at least temporarily. He’s not a natural point guard, but he’s shown Purdue that he can run simple pick-and-roll plays (3.1 passes).

– Creation, for him and for others.

As we have just mentioned, Jaden Ivey does not have the profile of a pure leader, since he was above all a rear finisher in the NCAA. He therefore logically lacks experience in terms of creation for his teammates (2.6 ball losses for 3.1 assists last season). If he were to be a main ball carrier on his next team, the NBA’s spaced play should, a priori, make his life easier in this exercise.

Naturally attracted by the “drive”, he can also be in difficulty to create his own shot. At the university level, this problem was not really one, since access to the circle was very rarely impossible for him. In the NBA, facing defenders that he will not physically dominate, he will have to find other solutions.

This is where the shoe pinches: for the time being, his dribbling is not sharp enough to allow him to create space. This is certainly its major axis of progress.

Ja Morantfor the first step, the changes of rhythm and the finishing touches to the circle at altitude; Victor Oladipo for the scorer and athletic “combo-guard” profile.

In 4th or 5th position, in Sacramento or Detroit. It seems inconceivable to imagine him leaving the Top 5.