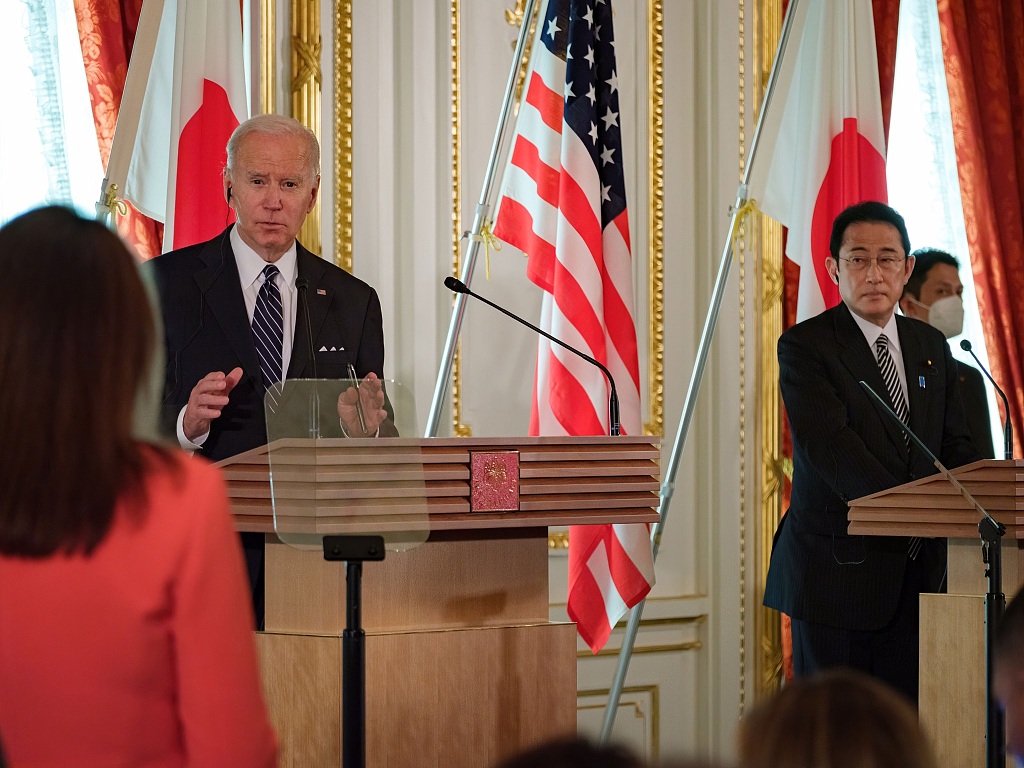 On Monday, the spokesperson for the Chinese Embassy in Japan expressed dissatisfaction and strong opposition after US and Japanese leaders Joe Biden and Fumio Kishida slammed China-related affairs. hurling unfounded accusations against him and grossly interfering in his internal affairs.

“Today’s world is facing changes and a pandemic unprecedented in a century. Solidarity and cooperation are what the international community needs most, and peace and stability are what the region most expects,” the spokesperson said in a statement.

However, Joe Biden’s visit to Japan has shown that under the guise of a “free and open Indo-Pacific”, Japan and the United States are actually creating divisions, pushing for confrontation and forming exclusive circles. This goes against the trend of the times and harms the overall interests of the countries in the region. This clearly cannot work, the spokesperson noted, urging Japan and the United States not to be obsessed with zero-sum games and confrontation between sides, not to pursue their own security at the expense of the security of other countries and not to allow outdated Cold War rhetoric to be repeated in the Asia-Pacific region.

“China will never allow any country to interfere in its internal affairs, harm its interests and smear its image,” the spokesperson said, noting that China-Japan ties are at a crossroads. China urges Japan to correct its attitude towards it, correct its strategic direction and manage its relations with China and the United States in a balanced manner.

Following their meeting on Monday, Joe Biden and Fumio Kishida stressed in a joint statement the importance of peace and stability in the Taiwan Strait. During a press conference, Joe Biden said he hoped China would not try to take control of the island of Taiwan by force.

In response, the spokesperson stressed that the island of Taiwan is an inseparable part of China, and the Taiwan issue is related to China’s sovereignty and territorial integrity, concerns its core interests, and ‘it suffered no interference from any foreign force.

According to him, the current tense and troubled situation on both sides of the Taiwan Strait stems from the fact that the authority of the Democratic Progressive Party (DPP) refuses to recognize the 1992 Consensus embodying the principle of one China and that it continues to engage in “independence” provocations in collusion with external forces.

“We are ready to do our best for peaceful reunification, but we will never give leeway to separatist activities for ‘Taiwan independence’ in any form,” the doorman warned. -word. He urged the United States to take concrete steps to abide by the one-China principle and the three Sino-American joint communiqués, be careful in words and deeds, and stop sending wrong signals to the pro-Taiwan independence forces.

In a joint press conference, Joe Biden and Fumio Kishida reaffirmed that any unilateral attempt to forcibly change the status quo is absolutely unacceptable, no matter where. They said the United States and Japan oppose such attempts in the East China Sea, including the Senkaku Islands (China’s Diaoyu Islands), and in the South China Sea, which are the subject of claims. from the neighboring countries.

“No matter what the United States and Japan say or do, they cannot change the fact that the Diaoyu Islands belong to China. […] China’s territorial sovereignty and maritime rights and interests in the South China Sea have sufficient historical and legal basis, and conform to international law and practice,” the spokesperson replied.

On Monday, Joe Biden announced the launch of the Indo-Pacific Economic Framework during his visit to Japan.

The spokesperson said that this framework was doomed if the United States aimed to use it to attack and destroy the current structure of regional cooperation, to politicize, to weaponize or to ideologize. economic issues, or to create division and confrontation in the Asia-Pacific region, in order to isolate and exclude China.

Regarding the two leaders’ comments on China’s nuclear power, the spokesperson noted that on the one hand the two countries had pledged to strengthen their engagement in the face of nuclear threats, but on the other, they continue to make irresponsible remarks about China’s nuclear policy, in order to avoid responsibility and divert attention.