Since the Russian invasion in Ukraine, the country has lived in torpor. But the Ukrainian selection, despite the immense difficulties, qualified for the Euro. She will fight with her weapons and is counting on Alex Len (Sacramento) and Svi Mykhailiuk (Toronto), the only two Ukrainian representatives (there is no Russian this season…) in the NBA.

The war has been raging in Ukraine for more than two months now. The Russian offensives intensify. Recently, Alex Len of Sacramento (28 years old, 570 NBA games on the clock since 2013 between Phoenix, Atlanta, Toronto, Washington and Sacramento, 7.7 points, 5.9 rebounds, 1 against for 18.9 minutes on average) and Svi Mykhailiuk from Toronto (24 years old, 220 games on the clock since 2018 between the Lakers, Detroit, OKC and Toronto, 6.6 points, 1.8 rebounds, 1.4 assists for 17 minutes on average), the only two Ukrainian players present in the NBA, both came out of their silence. 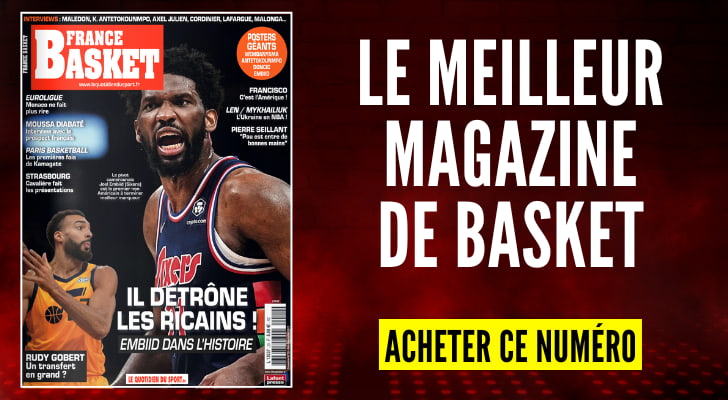 They have through a statement on social media “ sentenced » the Russian invasion: « A great tragedy falls on our dear homeland Ukraine », condemning « categorically war. Ukraine is a sovereign state inhabited by people who want to decide their own destiny. We hope that this terrible war will end as soon as possible. Dear Ukrainian compatriots, hold on! Our strength is in unity. We are with you “.

At the mention of these two illustrious names in Ukrainian basketball, Viacheslav Petrov (27), freelancing in Antibes (Viacheslav Bobrov joined Nanterre and Denys Loukashov Nancy), is dithyrambic:

” They are obviously two very high level players. Joining the NBA is very difficult. They have taken successive steps to find themselves in the United States. Having players of this caliber can only reflect a positive image on the Ukrainian selection. And even on the popularity of basketball in the country in general. But as for many players playing in the NBA, their presence in selection is not automatic.

Volkov and Potapenko, the precursors

Regarding the terrible political situation, Viacheslav Petrov is on the same wavelength as his two compatriots. The stressful daily life haunts the spirits…

” I admit that these days, it’s very complicated to think only of basketball. The situation in our country is so worrying. Before start a workout, I usually check the news on my phone. My wife and my daughter are with me in France. My partner’s relatives are in Ukraine. It’s really not easy. We wonder how the situation will develop.”

After its independence in 1991, Ukraine participated for the first time in a major international competition in 1997 at the European Championships (13th). The golden age of Ukrainian basketball dates back almost ten years. ” It was in 2013, recalls the interior of Antibes. Ukraine had finished 6th in the Euro. The best moment of the selection in terms of results. At that time, Ukraine had even qualified for the World Cup (18th in 2014, Editor’s note)”.

In the past, great Ukrainian players have even marked the history of their country such as Sergii Gladyr who made the heyday of Monaco of which he is today the assistant coach: “ He represented the country magnificently and played in major European clubs in Spain (Manresa, Editor’s note), in France (Nanterre, Nancy, Monaco, Editor’s note)”.

Volkov the first Ukrainian to join the NBA

We could also cite Alexander Volkov, the first Ukrainian to have played in the NBA (149 matches between 1989 and 1992 with Atlanta) and Vitaly Potapenko nicknamed the “Ukrainian train ». He was one of the first Ukrainians to have played in the NBA (ex-pivot of Cleveland, Boston, Seattle, Sacramento). He had even been drafted in 1996 by the Cavaliers (12th) in front of a certain Kobe Bryant!

Ukraine is currently 32nd in the FIBA ​​rankings. How to judge its real level? Petrov: ” The team is made up of good players. In spite of everything, we cannot single out one star more than another. I prefer to speak of collective strength. We work more as a team. Some certainly have more experience than others. Among them, players rub shoulders with the European Cups. Others have evolved at Prometey, a very good club. The technical staff is also efficient. The selection is also qualified for the next Euro. We could do even better. We are on the right way “.

What about the ambitions of the Yellow and Blue for the Euro next September for its 9th participation? ” It is difficult to say because of the situation that our country is currently going through. We don’t really know how we will prepare for this event. We also don’t really know what our team will look like. Some players are in Ukraine, others are in European clubs. One thing is certain: Ukrainian unity prevails”. This selection, if it is able to defend its chances, will be dignified, courageous and united. Like his people.